In case you haven’t heard, for several weeks now, Benin has experienced its worst flooding since 1963. Damage has spread to fifty-five out of its seventy-seven districts. According to UN figures, the flooding has affected nearly 700,000 people in a country of less than 9 million. At least sixty have died. Cholera and other health problems are worsening in the wake of the flooding, and the water has devastated 40% of the country’s food production. In other words, a set of interlocking problems – medical, agricultural, infrastructural, and others – are growing out of the flooding and are already affecting the entire country as well as some of its neighbors. 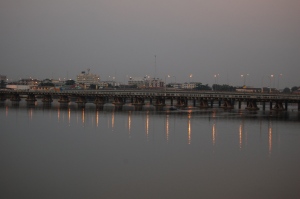 Aid agencies are responding. The UN is airlifting supplies into Benin, and other groups are helping with public health, refugees, and other matters. But Benin has a tough road ahead.

Here are three perspectives from the ground.

Areas previously thought not to be vulnerable to flooding have been devastated and villages wiped out.

Along rivers and lakes, fragile huts have been submerged in up to two metres of water.

“Some communities are used to being flooded every year,” said Helen Hawkins, Care’s water, sanitation and hygiene spokeswoman. “They have houses built on stilts and they leave and come back. But this year it’s far more severe. Some houses don’t survive and some areas not used to flooding are under water.”

Hawkins said people initially forced to take refuge on their roofs had been able to go back inside their homes as the waters receded in some areas. But the rains were predicted to continue all week and further flooding was possible.

Theresa, a blogger and non-profit consultant who lives in Cotonou, Benin:

The rains stopped in the North several weeks ago, but that doesn’t mean that the flooding from the Niger river and other northern waterways has stopped. Karimama, Malanville, and any towns around major bodies of water have been affected.

The Ouemé-Plateau is now really just the Ouemé river. The river, Lac Nokoué, and other bodies of water have flooded the plain.

The Zou has also been heavily flooded.

The Mono-Kouffo, with the Mono river and its thousands of lakes and rivers is equally flooded.

And then there’s Cotonou. My neighborhood is OK. We’re on a hill that gently slopes down towards a swamp. Those who live on the border of or in the swamp have been affected, but to be honest, they’re affected every year. Other parts of the city have not been so lucky. Lac Nokoué and the lagune have risen by several inches, flooding whole neighborhoods.

There are parts of Cotonou that can only be reached by pirogue (canoe), including major roads.

Finally, the BBC has a video report.

Let’s hope Benin gets the help it needs.