I am in Kano this week for a conference, and last night I had an exchange (off the record, I believe, so I won’t mention my interlocutors’ names) about the Islamic Movement in Nigeria, or IMN, a Shi’i group. The IMN’s leader Ibrahim al-Zakzaky has been detained since 2015, following a clash between the IMN and the Nigerian military in Zaria. Al-Zakzaky’s detention has sparked numerous IMN protests.

My interlocutors mentioned two potential ways to resolve the problem: exiling al-Zakzaky to Iran, or placing him under house arrest. Each path would have pros and cons, of course. The voice favoring exile said that one benefit of that path would be clarifying the nature of al-Zakzaky’s relationship with the Iranian government; if Iran tried to use him for propaganda purposes, the speaker said, Nigeria could respond by asking for international diplomatic support.

For my part, the issue of due legal process is vital. He should get a fair trial. But in terms of the ultimate outcome, the Nigerian government has options beyond the binary choice of letting al-Zakzaky go completely free or detaining him until he dies. The government would be wise, in my view, to choose a path other than indefinite detention.

[This guest post comes from Joseph Hammond, a freelance journalist. You can read more of his reporting on the 12th Islamic Summit here. Joseph in on Twitter here. – Alex]

Senegal’s Ambassador Mouhamadou Doudou Lo is one of Senegal’s high profile diplomats. His career has seen postings in a number of Arab capitals and also a stint as Senegal’s ambassador to Brazil. More recently Lo has served as Senegal’s ambassador to Saudi Arabia in Riyadh. Lo has subsequently become a key figure in Senegal’s relationship with the Organization of the Islamic Cooperation. Senegal has traditionally played a leadership role in the OIC. Founded in 1969, the OIC is the world’s second largest intergovernmental organization after the United Nations and is based in Jeddah. The ambassador spoke with Joseph Hammond on the sidelines of the of the 12th Islamic Summit in Cairo.

We reevaluated the situation with regard to Iran [at the Islamic Summit], the Islamic Republic of Iran is after all a fellow OIC member country and we now realize that it is the time for us to re-establish our relationship[with Iran] because we are moving in the same direction. Thus, our relationship has been re-established in a way that respects our sovereignty and our rights within the framework of the Muslim world and the workings of the OIC.

….As I understand it in 2011 Senegal broke relations with Iran over Iranian arm shipments to rebels in Senegal. Have the issues related to severing of ties with Iran been resolved?

“We don’t want to look backward and on this issue… [from our perspective] it has been resolved. Now we are looking forward and hoping to develop a relationship within the framework of friendship, a forward looking relationship with improved cooperation.

Until the Islamic Summit in Cairo, Senegal had the extraordinary opportunity to hold the presidency of the OIC for an extraordinary 5 years. This is due to the fact that the Islamic Summit was twice postponed before the meeting in Cairo. The last five years during which Senegal has been President of the OIC, have been productive ones. During this period the OIC has seen a number of new achievements including a new logo and the renaming of the OIC from the Organization of the Islamic Conference to the Organization of Islamic Cooperation. These are some of the many achievements toward the modernization of the OIC as an organization that Senegal has been a part of. We have also helped in progress toward other goals as well. In particular in the cultural sector, where we held a leadership role in the OIC Standing Committee for Information and Cultural Affairs (COMIAC).

Cultural issues were a big part of the past Islamic Summit. Since the last Islamic Summit, the Muslim world has seen the desecration of a number of historic sites weather in Libya or in Mali. Indeed, Muhammad VI, the King of Morocco touched on attacks on Mali’s “cultural heritage” during his speech to the Islamic Summit. How is the OIC seeking to address this issue?

Historic sites in the Muslim world need to be protected whether in Africa or elsewhere. The resolution on Mali passed at the 12th Islamic Summit in Cairo condemned the destruction of cultural sites in Timbuktu. The OIC must take steps to ensure the situation we have seen in Mali will not be repeated. We must preserve the cultural and historic heritage of [the] world’s Islamic monuments. These are sites important to [the] world’s history and heritage as well.

On October 23/24, explosions occurred at the Yarmouk weapons factory in Sudan. The Sudanese government has stated that an Israeli airstrike was responsible. The situation remains murky enough that I do not feel comfortable writing an analytical piece on the issue, but the incident has generated substantial media attention, so I thought I would round up some important stories.

What do you make of this whole affair?

Alex de Waal writes on confusion in Sudan: “Finding the truth is always hard in the Sudanese political scene. At the moment it is simply impossible.” And Opheera McDoom offers a “Journalist’s Guide to Covering Sudanese Politics.”

In Somaliland, a “homemade helicopter” (h/t Texas in Africa).

A Nigerian insider argues for a complete and decisive transfer of power from President Yar’Adua to Acting President Jonathan. In other Nigeria coverage, Loomnie talks oil and transparency.

UN Dispatch fills us in on events in Guinea-Bissau, and argues that Chad needs the UN.

The China in Africa blog is back. And speaking of Africa’s ties with other lands, the Azanian Sea points us to a documentary on the African diaspora in Iran.

Finally, the US State Department tells citizens how to avoid international scams.

Deutsche Welle has an interesting piece on Iran’s outreach to Africa: 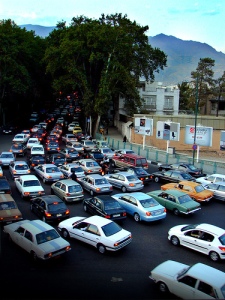 [In] the last decade, Iran has improved relations with African countries by turning to them for investment and trade as it has become more isolated by the West.

In Africa, Iran has engaged in economic and development projects in a number of countries: in Senegal where Khodro, Iran’s largest car manufacturer, opened an assembly line in 2007; Nigeria with which it has agreed to share nuclear technology for the production of electricity; and it enjoys good relations with South Africa (a regional leader) where its support of the ANC during the apartheid era has meant that South Africa has remained a true friend.

However, nowhere is the success of Iran’s investment quite as clear as in Sudan. “Iran has been successful in strengthening ties with Sudan because the two countries have an ideological link. They are standing up against the West and imperialism,” Sanam Vakil, an expert on Iran at the Johns Hopkins University in Washington DC, told Deutsche Welle.

Check out the whole thing.

Alle at Maghreb Politics Review takes note of yesterday’s post on slavery in Mauritania and offers some thoughts of his own on the cultural context in which slavery exists. Alle also makes the important observation that slavery in the region is not limited to Mauritania, but occurs in other Saharan and Sahelian countries. Check out the whole post.

In other Mauritania news, I’ve been asking myself whether recent diplomatic talks between Middle Eastern countries and Mauritania have any special significance. This week, Mauritania and Yemen discussed expanding their diplomatic ties, and the UAE and Mauritania are seeking ways to increase cooperation. At the Organization of the Islamic Conference meeting in Turkey this week, Iranian President Mahmoud Ahmadinejad reaffirmed his country’s interest in Mauritania. Maybe all these meetings are run of the mill diplomatic business, or maybe all these incidents indicate that now that the elections are over, other countries are more interested in improving their relations with President Abdel Aziz.